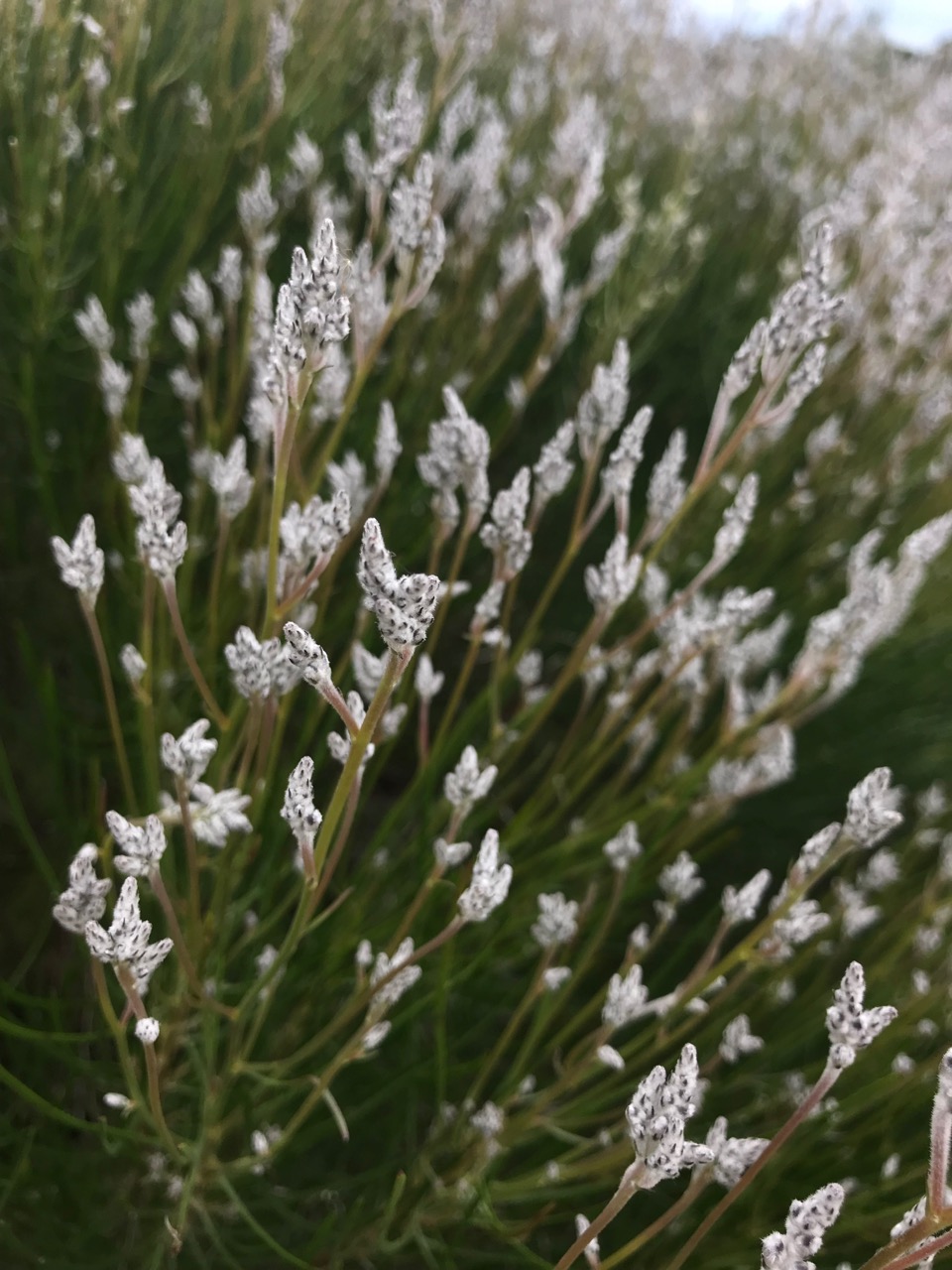 Over the last few years I've spent a fair bit of time at Royal Botanic Gardens Cranbourne, one of the flagship gardens for Australian native plants in Australia. It's such an inspiring botanic garden and every time I visit I find something unexpected and new and inspiring.

One of the plants I was drawn to at the gardens is Conospermum stoechadis. The common name for this plant is Common smoke bush.

From a distance it really does look like a light grey smoky colour, and when there's a light breeze, the shrub waves softly in the wind. It's easy to see how it got its common name.

What I didn't realise until much later is that some of the mechanisms this genus of plants uses to survive in the Australian bush are really incredible.

But first, some basics: Conospermum

Conospermum is a genus within the Proteaceae family (loosely, the Protea family), which is a group of plants primarily found in Australia and South Africa. Some of the other members of this family include Banksias, Grevilleas, Proteas, Leucadendrons, and so on.

The etymology of the Conospermum genus stems from the Greek words for 'cone' and 'seed', referring to the cone-shaped nut (it's actually a fruit).

Conospermums occur naturally in the south-west area of Western Australia, growing as far inland as Kalgoorlie and as far east as Esperance.

Their natural habitat generally features free-drained, deep acid sand with a pH of around 5.8 - 6.8. As with many other members of the Proteaceae family, they are reasonably intolerant of phosphorus in soil and doesn't like heavy soils.

There are around 50 recognised species within Conospermum and all are endemic to Australia.

Here's where things get really cool.

Most members of the Proteaceae family have adapted to overcome difficulties with pollination by evolving a pollen presenter. In other words, pollen is located on the end of a style, thereby 'presenting' the pollen to a potential pollinator so they don't have to do so much hard work to get to the pollen.

Interestingly, Conospermums don't have a pollen presenter, which is a conspicuous absence for a plant within this family.

So how do they get around this?

It seems that the Conospermum genus has evolved to find new ways to attract pollinators and facilitate pollination, some of which are really cool.

A couple of sources (this ABC News article and this In Defence of Plants blog post) detail the way Conospermums have evolved to attract and reward potential pollinators.

Researchers have recently found that native bees and, surprisingly, ants are both really effective pollinators for Conospermums, and in fact successful pollination depends on visits from both native bees and ants, which is super unusual, at least to our knowledge.

Researchers have been able to isolate an alkaloid substance from the roots of a species of Conospermum that shows potential for treatment of HIV.

Conocurvone has, at least in a lab setting, been able to stop replication of HIV cells in some strains of HIV.

The substance is a napthoquinone trimer, a secondary metabolic substance that some plants, lichens and microorganisms emit naturally

However, it's not clear how effective this alkaloid may be, as some research has questioned the potential value of conocurvone, as it may not be able to be taken up by the human body effectively and may only be successful in stopping HIV cells from replicating in some, but not all, strains of HIV.