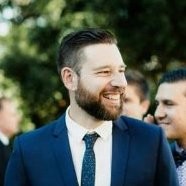 I currently live in Melbourne, but grew up in Tasmania, where I developed a deep love for wild weather and potatoes. I like bushwalking, talking shop about music, cooking, and cycling (slowly).

I have a long history of performing music, playing my first gig at age twelve, and spending most of my twenties playing in bands. I ran a record label, promoted more shows than I can count, managed a studio / rehearsal space, and toured Australia many times over on a shoestring budget.

I spent a decade working in online communications roles in the NGO sector and three years freelancing as a motion picture professional before making a career change into the horticulture industry in 2018. I completed my Diploma of Horticulture in 2019, while working as a Nursery Hand at two production nurseries. I have a passion for Australian native plants, and a drive to try to make the world a better place, even in small ways, through my work.

I acknowledge and pay my respects to the Wurundjeri and Boon Wurrung peoples of the Kulin nation, the traditional owners and custodians of the lands on which I live and work.

Send me an email